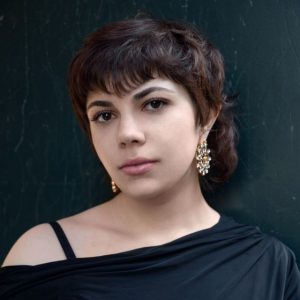 Bianca Beltramello began her journey in the visual arts as painter and illustrator.
Her talent was initially discovered by Enzo Migneco “Togo” in 2009. Since then, she has been showcasing her works in various events and exhibitions, both collective and personal.
Her works focus on the male figure, painted with a photorealistic technique, then framed in an abstract and materic composition, mixing digital, innovative and traditional media.

She then put her artistic background to good use in fashion, dressing the very subject of her paintings – the male body. She specialized in print design, drawing and painting prints for fabric, now working as Prints and Graphics Designer for menswear at Versace.

Through fashion, she delved in photography, taking part in shootings for her menswear collections and personal projects as art director.

She started taking photos herself under the guidance of an experienced photographer, who grew to be a close friend and mentor, after posing for him.

Art, fashion and photography are different facetings of a same vision, different means to investigate reality and people, sharing the same aesthetics. Through her works, Bianca finds the intimate daintiness of male bodies, releasing their vulnerability and detaching from social stereotypes about virility.

Bianca Beltramello’s works are placed in surrealism and symbolism at the same time: the explanation of a work is within the work itself. The titles refer to Latin liturgy and Catholic traditio, as fragments of sacredness recontextualized and internalized, pictorially expressed in their intrinsic and profound truth.

In her works, the body becomes a living canvas on which suffering and ecstasy are engraved, imprinted and expressed. Man finds himself stretched between four poles: spiritual ecstasy and carnal ecstasy, spiritual and carnal torment and in this extreme tension he tears himself apart. The lacerated body thus becomes a symbol of the laceration of the soul.

The artist identifies and develops in his paintings the inner search of the human in relation to the divine which is expressed through a dualism of values ​​and miseries, of sanctity and damnation, of the carnal and the otherworldly.

For this reason, the artist’s favorite subjects are never perfectly defined: the bodies fade, open and close, the objects that surround them intersect and blend with them. Impalpable mists of precious and shining gold unravel, ethereal but enveloping; flashes of color create unexpected movements, while gloomy and dark backgrounds bring back to the mortal human dimension. Dazzling golds abound in painted material interventions, in contrast with the digital photorealistic technique applied to the bodies. It is indeed the male body the central subject of paintings, analyzed in its sensuality as an emblem of the relationship between essence and existence.

This website uses cookies so that we can provide you with the best user experience possible. Cookie information is stored in your browser and performs functions such as recognising you when you return to our website and helping our team to understand which sections of the website you find most interesting and useful.